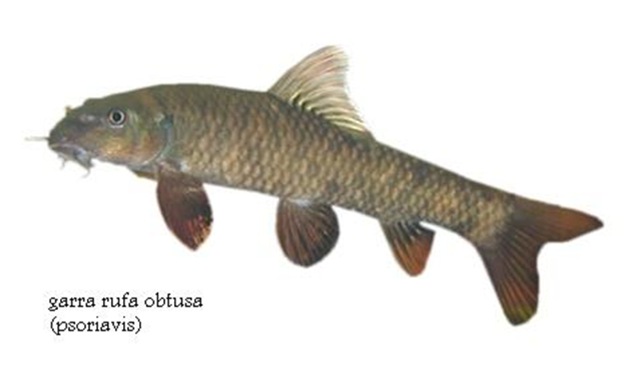 The Garra Rufa fish originates in the warm waters of Kangal in Turkey. People in the area has benefited for hundreds of years from the properties of these fish to improve skin problems like psoriasis, eczema, corns, acne and more.

In 1960 the water containing the fish were discovered by tourists.Since then and until now it has become a place visited by people from all over the world to treat various skin conditions mentioned above.

How does the Garra Rufa fish work on skin?

The Garra Rufa fish ”sucks” softly dead cells of the epidermis (outer layer of skin) without touching the dermis (inner layer of the skin). In the process of removing dead cells this type of fish generates an enzyme that has a regenerating effect on the skin to grow. That is, the dead skin is removed and the skin ”new” issofter and healthier than before.

Due to the healing properties that these fish are known for they are also called “doctor fish.” However, this name has been used not only for the Garra Rufa fish. There is a type of fish being marketed as pedicure fish known as the AsianChin-Chin fish. These Asian species of fish also eat dead skin cells, but once they reach two inches in size they will grow teeth and start eating the dead cells as well as the living cells by biting into the skin.

The cosmetic treatment using Garra Rufa fish is unique. This pedicure is original and one hundred percent natural and has been a resounding success in many countries in Europe and Asia. Garra Rufa fish are now allowed in many states in the United States  at premium Garra Rufa Spas. For a location near you, do a search here.